Powers are supernatural abilities possessed by magical beings, Such as Witches. 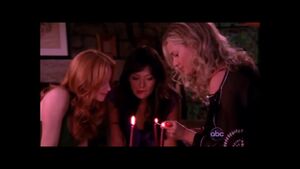 Casting spells is the ability to change or control events by reciting a few words. It is one of the basic powers that all magical witches have.

The other is the ability to brew and concoct supernatural potions that contain mystical properties.

The ability to have visions of the future.

The user may experience the vision in a dream or when they are awake. With this ability the user will also be able to see and talk to Ghost's. And on a rare celestial event, the power will advance to great extent. And the user will simple have to touch someone to receive a vision. This is the primary of Roxie Torcoletti.

The power the forcibly compel people to do things against their will.

This can be used to an even deadlier extent to persuade someone to hurting or even killing themselves. For example, if the user says for someone to "choke". They will choke. This is another power of Roxie Torcoletti.

The ability to read the thoughts of others.

The user may unknowing use their gift as seen being used by Roxie Torcoletti, when she accidentally read the mind of her overbearing mother.

The ability to make incredibly strong suggestions to the subconscious of others.

With this power the user can make a person do anything the want, such as give them money, kiss them, release them in a struggle, etc. Though strong willed subjects may be able to resist this power. And with a special amulet, they will also be resistant to the ability. This was the primary power of Joanna Frankel, though her power only worked over men.

The ability to move things with your mind.

This power was first seen being used by Joanna Frankel. She used it many time thought out the series, many time she used it to simply push things over to her, like when she escaped from Pastor Dunn. But on a more stronger level she was also able to push things away, as seen when she and Kat were trying to save Roxie from Jamie. She with great force was able to fling him against a tree.

The ability to summon the forces of Mother Nature herself.

With this power the user can manipulate all aspects of nature, This includes:

Hydrokinesis: (Manipulation of water, such as boiling and freezing it.)

Aerokinesis (Wind, such as creating a strong gust)

Geokinesis (Control the earth and rocks, such as creating earthquakes)

Electrokinesis (Creating thunder and bolts of lighting, but not electricity)

Atmokinesis (Manipulating the weather, such as rain or lightning)

This was the primary power of Kat Gardener, as described by Darryl, Kat had the hands of a "healer" like Mother Nature herself, nurturing yet destructive!

The ability to heal/cure wounds and injury

This was another of Kat's powers, with this she could heal many injuries from cuts to drowning victims, though see could not heal the dead. The negative side of this gift is, the user can only heal a few people before feeling the effects. The results of healing too many were: weakness, tiredness, nose bleedings, gray hair and later unconsciousness. The reason behind this is, unlike her ability to control the elements which gave her strength, the negative energy she took away from people when healing them went into her. The user would have to sleep for a number of hours to gain their strengh again. 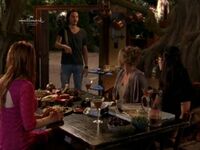 The power to enter another person's dreams

Only appeared once in the series in the Episode Red Bath and Beyond. When all the girls where unconscious, they were all able to join together in the same dream. When in it, they were able to show where or what was happening to them. For Kat, she suddenly appeared wet and unwell. From being asleep in the bath, recoving from her healing rampage. Joanna soon went stiff, from being paralyzed by Eleanor's poisoned tea and trapped in her cellar. And Roxie started to leave bloodly handprints, by her hand being cut from Jamie's attack. And was later taken away by him to Buckhill trail.

Retrieved from "https://eastwick.fandom.com/wiki/Magic?oldid=4431"
Community content is available under CC-BY-SA unless otherwise noted.