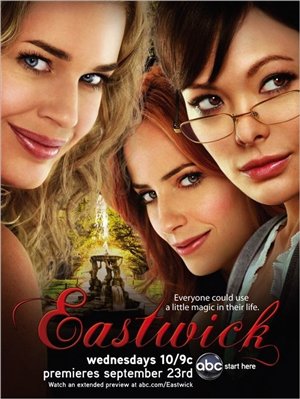 Eastwick was an American Supernatural Dramedy television series based on John Updike's novel, The Witches of Eastwick. Premiered on ABC on September 23, 2009, it follows the lives of three small town women — Roxanne Torcoletti, the free free-spirited sculptress. Joanna Frankel, the insecure news reporter at the “Eastwick Gazette" and Kat Gardener the level-headed mother of five children and nurse of the Eastwick General Hospital. Who after wishing for something to change accidentally summon a mysterious man to the sleepy town of Eastwick, and awaken their unique abilitys.....

Eastwick opened with initially mixed reviews. Metacritic has gives the series a score of 50% based on the pilot episode, Entertainment Weekly gave the pilot episode a B, stating the show "plays like Desperate Housewives if the Wisteria Lane ladies liked prestidigitation instead of poker." The Boston Globe gave the show a more positive review: its writer still compared it to Desperate Housewives, but said, "Desperate Housewives is frustrating because it can’t seem to decide what it is: murder mystery, silly farce, or realistic look at domestic woes. Eastwick is allegory and knows it, so it can be plausibly silly and over-the-top, and hint at real issues - women in the workplace, gender politics at home - without trying too hard ... I’ll take witch hazel over wisteria any day." The New York Post described Eastwick as the best new fall show of 2009, giving it a Grade A-, the highest score for any of the new shows graded.

Eastwick saw better success internationally than in the United States. The show premiered in the United Kingdom on November 24, 2009. The pilot episode gathered 157,000 viewers on Hallmark Channel, following episodes usually got the top spot for the channel of the week. The sixth episode pulled in 194,000 viewers and then an additional 110,000 at 11pm, totalling 304,000. The United Kingdom were the first to see episodes eleven and thirteen, the series finale, as the United States left those two episodes unaired. The series finale airing February 14, 2010, achieved 201,000 on Hallmark, the highest of the series.

The series is based on the 1984 novel and film counterpart, The Witches of Eastwick. While the book was created by John Updike, the series was conceived by Maggie Friedman, who wanted to create a show about female empowerment. ABC picked the show up early 2009.

The series was filmed on the Warner Bros. Studios backlot, using the same town square as The WB's series, Gilmore Girls. Filming of the pilot began in August 2009, when all characters had been cast, Matt Dallas being the last to be cast on July 30.

Eastwick was one of the eighty-four shows canceled during the 2009-10 season. After the series was canceled on November 9, Kristin of E! Online held an online campaign for endangered shows in which Eastwick won the poll with 54.5% of the vote, the creator Maggie Friedman, was said to be furious with how the show was mishandled on the network, particularly with its timeslot and the irregular airings of the later episodes with little to no promotion.

Although the brilleant Eastwick was short-lived, the supernatural drama became a favorite for fans of the occult. The pilot episode, which achieved 8.53 million viewers. It remained the highest viewed telecast on ABC at the Wednesday 10pm hour until ABC's new telecast series "Revenge" premiered and scored a 3.3 adults 18-49 rating and 10.02 million viewers. Winning the 10pm hour time slot, against CSI: Crime Scene Investigation and Law & Order: Special Victims Unit. The premiere episode also became one of the highest-viewed pilots of a supernatural series based on witches, even beating cult favorite Charmed (7.70 million viewers). In August 2010, it was "pick of the week" in The Times, where the journalist speculated the show would get a cult following.

Retrieved from "https://eastwick.fandom.com/wiki/Eastwick?oldid=4328"
Community content is available under CC-BY-SA unless otherwise noted.